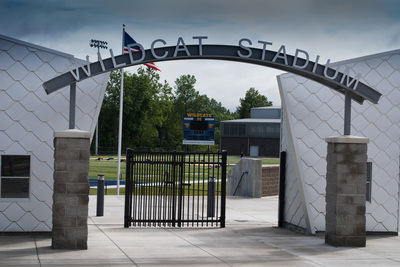 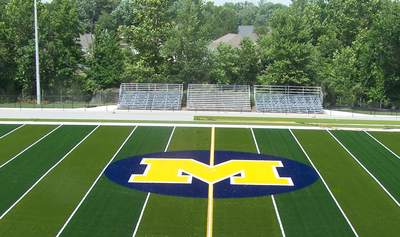 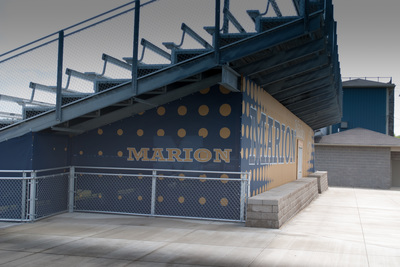 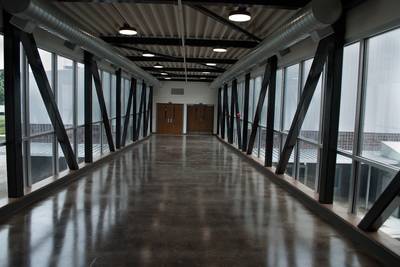 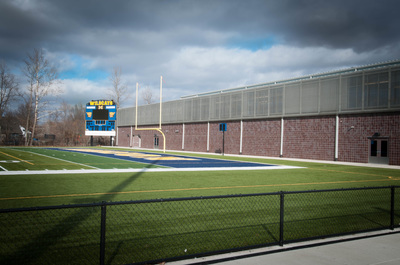 Wildcat Stadium    Construction of a multi-phased project for the renovation of Wildcat Stadium began in October of 2012.  Marion CUSD No. 2 wanted to renovate their dated football and track facility as a major component of construction of their new high school.  The first step included the relocation the existing 400 meter track to an adjacent piece of property that was home to the districts baseball, softball and soccer fields.  The relocation of the track opened up the area needed to create a synthetic turf field of adequate size to be home to both competition football and National Federation of State High School Associations recommended size of competition soccer field.  This was an opportunity that not many high school synthetic turf facilities face as the size of a 400 meter track interferes with the recommended width of the soccer field.  The project also created a welcoming sequence of stadium signage, ticket booths, ornamental fencing and gates, and wide entry stairs and ramps at the southwest corner of the field.  This new entry closely matches the main entry sidewalks and ticket booth area that was installed as a part of previous building construction phases of the new high school facility.  Other components of the new stadium include new ornamental and vinyl coated chain link fencing throughout the stadium, new concrete paving and sidewalks throughout the facility, creation of a new spacious covered booster club patio, and new scoreboard and play clocks, which required renovation to the scorer’s room situation in the existing field house.  Other highlights are renovations / improvements to the existing 1400 seat home grandstand, expansion of the home grandstand that included 750 new seats, replacement of the existing damaged visitor bleachers with new 400 seat visitor grandstand, and creation of the new 400 seat end zone grandstand.  However, the highlight of the renovation in the mind of any of the high school football players is the tunnel.  Excavation and new concrete paving and stair work occurred between the existing locker rooms, situated in a field house building directly behind the home grandstand, and the edge of the new turf fields which allows the teams to run out during pre-game activities directly under the home crowd.