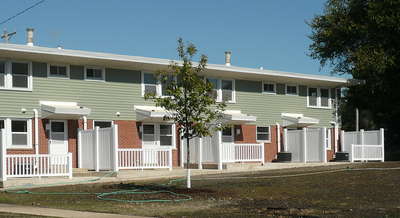 Our  assignment was to remodel six 1954 buildings to updated standards.  This involved a complete interior remodel of the kitchens, bathrooms, bedrooms to adding new laundry rooms and new air conditioning systems.  Extensive electrical and plumbing upgrades were also neede due to code issues and the age of the fixtures.

The project also included roof replacement on five buildings.  We proposed and specified a 20 year roofing system to help benefit the Authority for the long term.

As a part of this remodel, several units were up graded to ADA standards for the hearing and visually impaired.  Strobes and annunciations were installed along with smoke and carbon monoxide detectors for the hearing impaired.